Tucked away on the busy Queen Victoria Street and up a decently steep flight of steps (which double as coveted al freso lunchtime seating…) lies the reconstructed church of St. Andrew by the Wardrobe. A place of worship has been recorded here since the late 12C (originally known as St. Andrew juxta Baynard’s castle),  but the Great Fire of London and the Blitz have ensured that this building is of Wren design on the outside and completely reconstructed on the inside. This was the last of Wren’s City parish churches, and is often overlooked in favour of some of his more opulent works.

St. Andrew was originally quite close (obviously) to the now lost Castle Baynard. The castle itself was present from the time of the Norman Conquest until the Great Fire, though now it survives in memory only as the name of one of the wards in the City of London. The small church changed its name when the kings stores were moved to the then newly built wardrobe in the 14C – hence the current name ‘by the Wardrobe’. The wardrobe (as it was more of a department than just a building) was responsible for the purchase and storage of the fine fabrics and ceremonial garments for the king. The wardrobe also granted cloth to various members of the court and people of status for use in processions – in 1604 a grant of ‘red scarlet cloth’ was granted to Shakespeare for the coronation procession of James I. The kings wardrobe was moved from this area in 1666 following the Great Fire, its commemorative plaque can be seen at 5 Wardrobe Place. After the Great Fire, Wren rebuilt St. Andrew by the Wardrobe from 1685-1694.

In 1940 the church was gutted in the Blitz and all but three of the fittings (a sword rest and two monuments) were destroyed. The current building was finished in 1961 by Marshall Sisson – who used Wren’s original plans to reconstruct and redecorate the interior. The collection of furnishings are an interesting selection of items from various other churches. The font, font cover, and pulpit are all originally from St. Matthew Friday Street and the royal arms are from St. Olave Jewry. The beautiful west stained glass window showing the conversion of St. Paul by Joshua Price was originally designed for Bulstrode Park. Though the most overlooked and yet interesting items collected here are the two wooden figures – one of St. Andrew from roughly 1600, and another of St. Ann – the mother of the Virgin Mary seen holding Mary who is in turn holding the Christ child from roughly 1500. 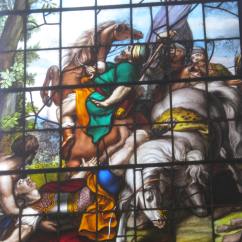 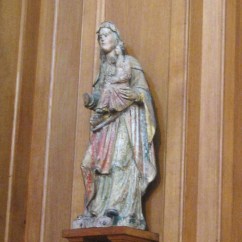 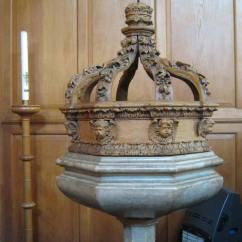 Perhaps the most famous item in the building, however, is the memorial to Shakespeare – who was associated with the parish while he completed work at the Blackfriars Theatre and lived within the parish boundaries in his home in Ireland Yard.  Across from him the gallery is his contemporary – John Dowland the lutenist, who was originally buried in St. Ann’s Blackfriars, another church which was merged with the parish of St. Andrew after the fire. Despite being new, these beautiful wooden memorials are the most sought after items in the building by visitors. 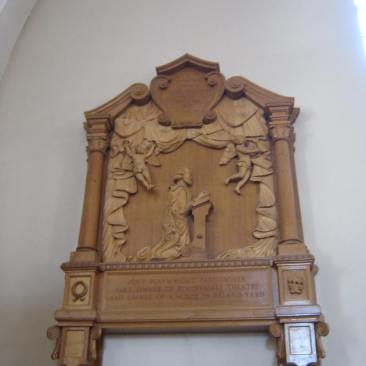 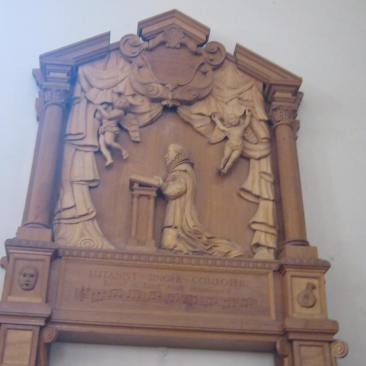 When visiting look up to the galleries and note the flags. You will see the Worshipful Companies of Apothecaries, Parish Clerks, Mercers, and Blacksmiths represented here. Also look very closely at the light fixtures – one has small bearded faces with hats, the other has a double-headed eagle. Though these details don’t seem to be mentioned in any of the literature regarding the history of the building and its collection of furnishings – they are certainly interesting to look at. 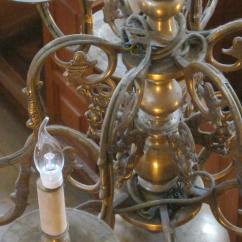 Bearded faces with hats in the light fixtures 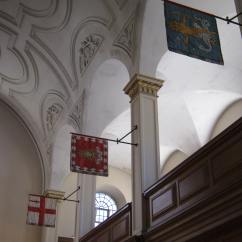 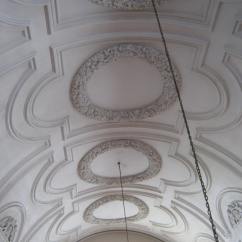 Restored plasterwork on the ceiling

Also – one of the bells is allegedly haunted if you’re looking for interesting ghost or folklore stories! (Sorry I love goofy ghost stories from time to time!!!)

1 thought on “St. Andrew by the Wardrobe”

Check out the current favourites:

This work is licensed under a Creative Commons Attribution-NonCommercial-ShareAlike 4.0 International License.